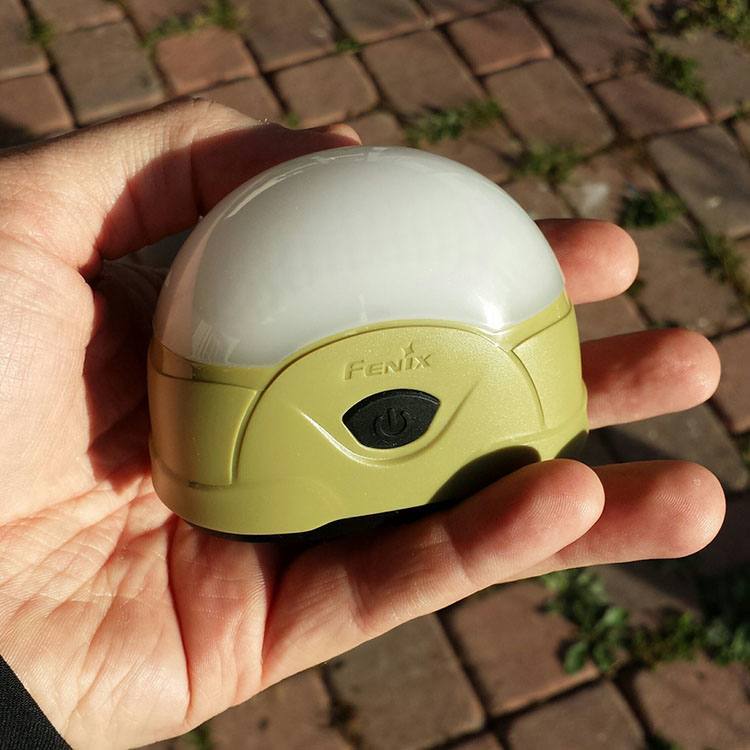 Small enough to fit in your pocket with the power to compete with lanterns ten times it’s size The Fenix ﻿﻿﻿CL20 LED Camping Lantern proved to be the best of the small lamps we have tried.

Tough, tiny, bright, weatherproof, rechargeable and magnetic – we struggled to find many faults. We even put it in the freezer to see if the ‘All Season’ claims were legit.

The price tag is well worth the money for a lantern that can do so much. 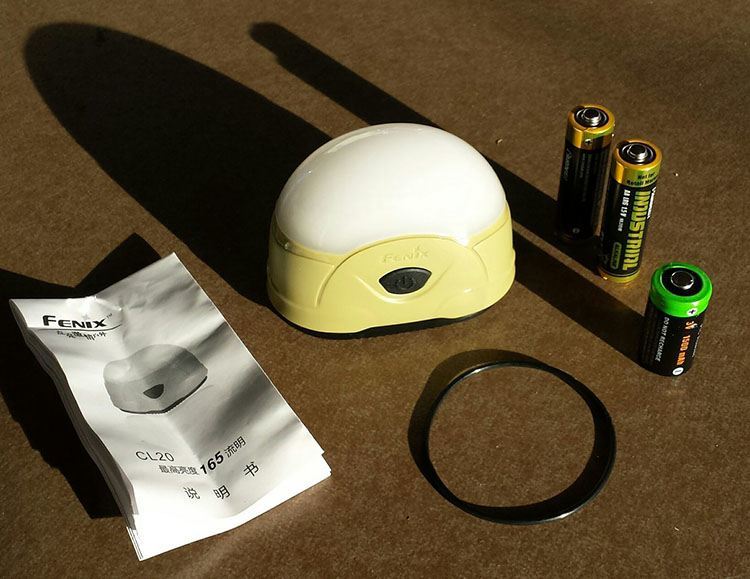 Out of the package it comes complete with a spare gasket and two battery options, doubles A’s or the Edison Bright C123A lithium ion battery for cold temperatures (they say down to -40 degrees). Powered by 9 white LED and 2 red LED bulbs it puts out an impressive amount of light. 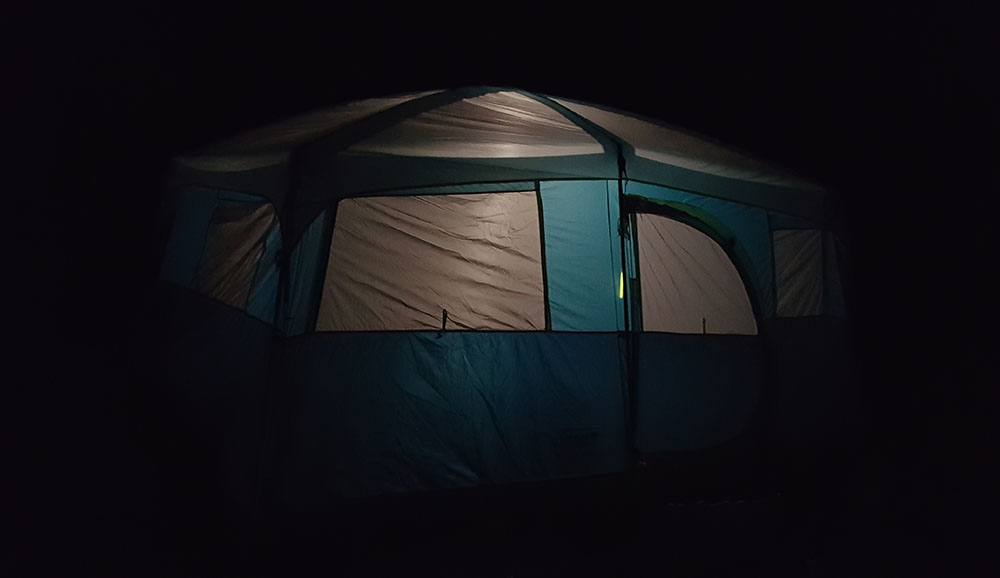 When I opened the CL20, my first thought was there is no way it’s as strong as they say it is. How could a light smaller than a baseball, light up a tent or a trail like they show in the ads? I had my doubts but as you can see it lit up our family camping tent which measures 13 x 9 feet.

We could even read by it when we hung it from the top of the tent. 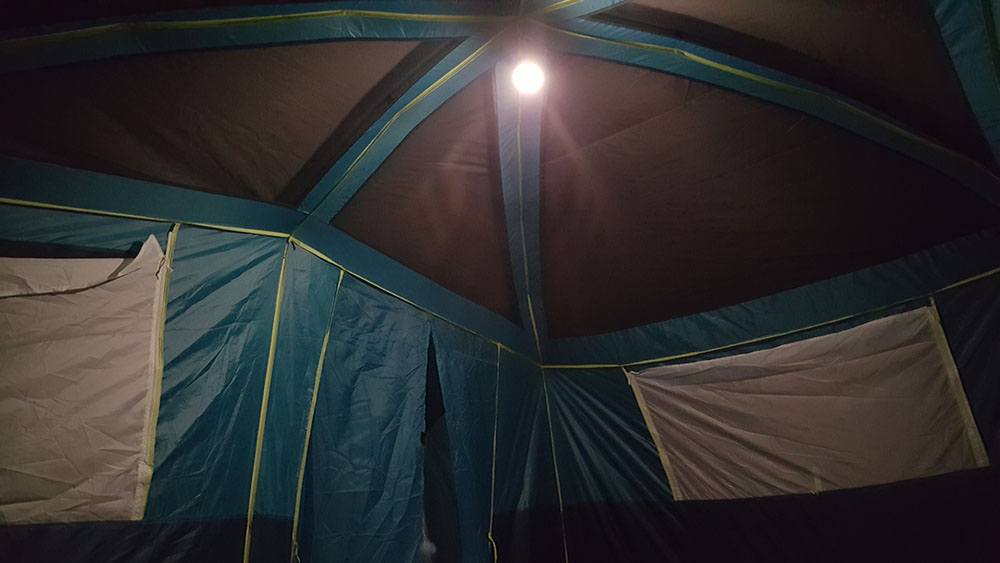 Power Settings of the Fenix CL20

Pressing the power button scrolls through the four power modes:​

​I found that the medium setting provided the right balance of good light and battery life. The higher settings are very strong and rival any of the larger lanterns we have used over the years. It is very impressive how they packed such punch in a small unit. The only downside to the high beams was limited battery life, which at the ‘shield your eyes’ setting lasts an unimpressive 2 to 3 hours.

The frosted cover does keep the light well dispersed and limits hot spots but at the higher settings it definitely isn’t glare proof. No light really is in my opinion. A bright light is a bright light and this one is no different.

The small but powerful LED bulbs threw light just as far and for much longer than the old Coleman lantern we had been using that took 6 D batteries. In the family 6 person tent we were able to read books and play cards by hanging one CL20 from the tent peak.

Setting it on high we used it for a couple of hours each night for three nights which was better than the advertised battery life on Ni-MH double A’s. From the outside, the tent was so lit you would have thought we had a huge powerhouse inside.

Putting ‘All Season’ To The Test

This ad picturing the CL20 frozen in a block of ice caught my eye. Lots of gear companies claim their stuff is weatherproof, which usually means rain, but few go this far. 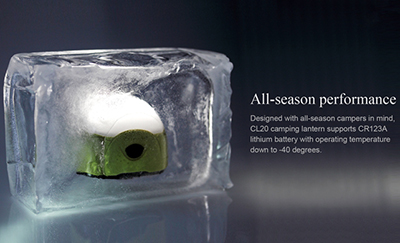 I wanted to see if the lantern would actually work in single digit temps for a prolonged period of time. The only problem, it’s November in New York and 65 degrees. Enter the freezer test. Sitting in my garage is the beast… the Frigidaire! Set at a constant 6 degrees, I thought I would give it a shot and see if the CL20 would keep burning bright after several hours next to our frozen chocolate chip pancakes and Texas toast. I made sure to put in the Lithium Ion battery, which is made for use in cold temperatures. 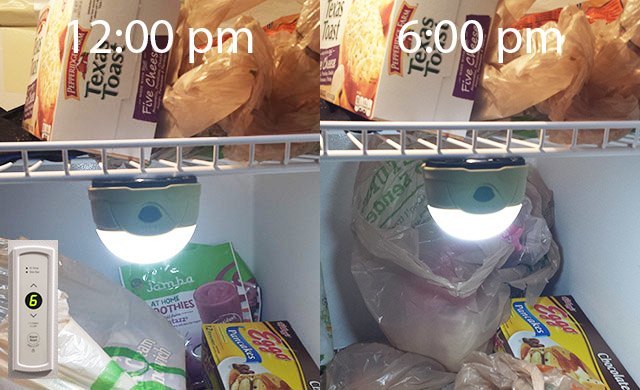 After 6 hours on the medium power setting, the CL20 was still cranking out the same level of light without a flicker. LED’s create very little heat so I figured it would at least have some frost on it but it did not. It was cold to the touch but less than expected which surprised me.

The Fenix CL20 passed the freezer test like a champ.

A handy ring on the bottom (which you turn to unlock/lock the base and battery compartment) allows you to hang the light in your tent or attach it to a carabiner for that late night bathroom break in the woods (I hang it from a tree branch myself). 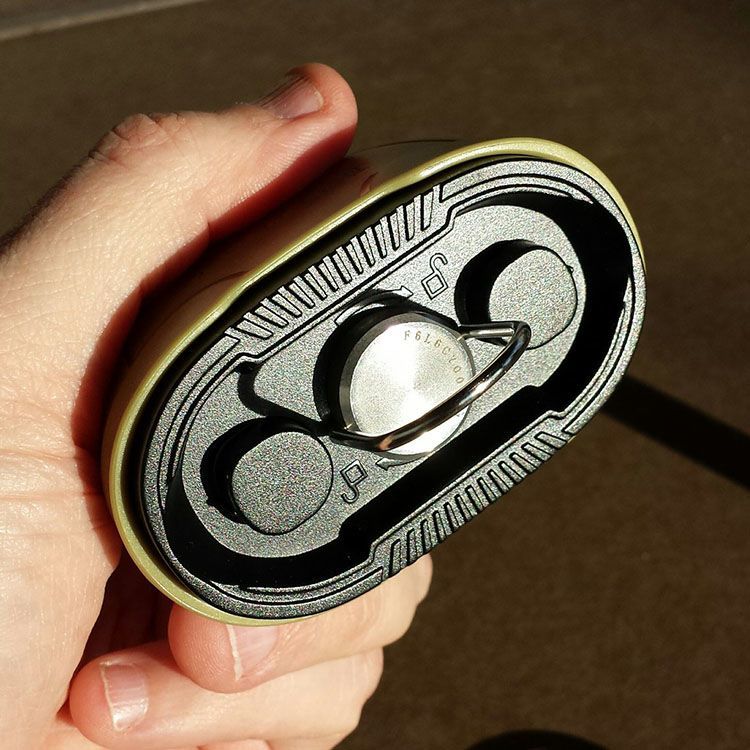 The powerful magnet on the bottom is another nice touch, you can stick the lantern just about anywhere you need light. I’ve stuck mine on my patio, car, camp table, camp chair and even a curtain rod in the house during a power outage. It’s one of my favorite features of the CL20. 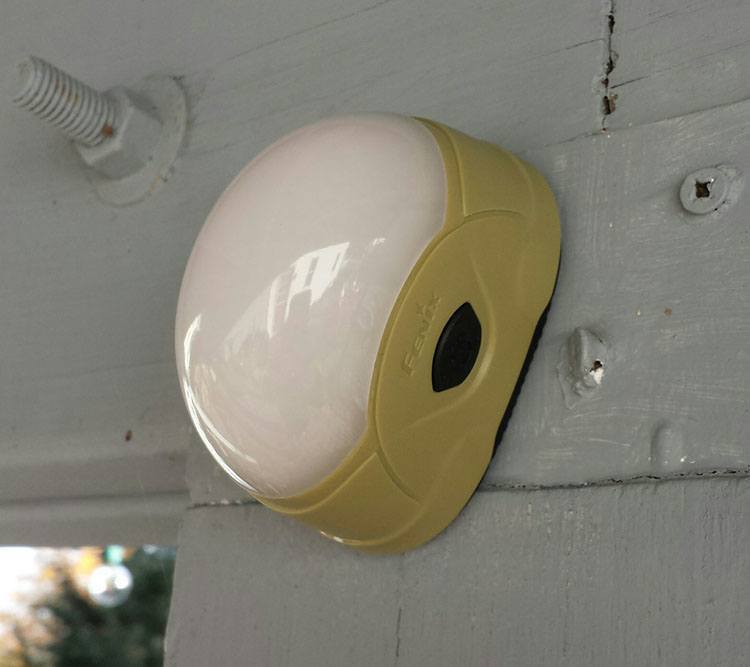 Remove the base and you will notice three battery bays. One for the LI battery, and the two AA battery bays on top of that. 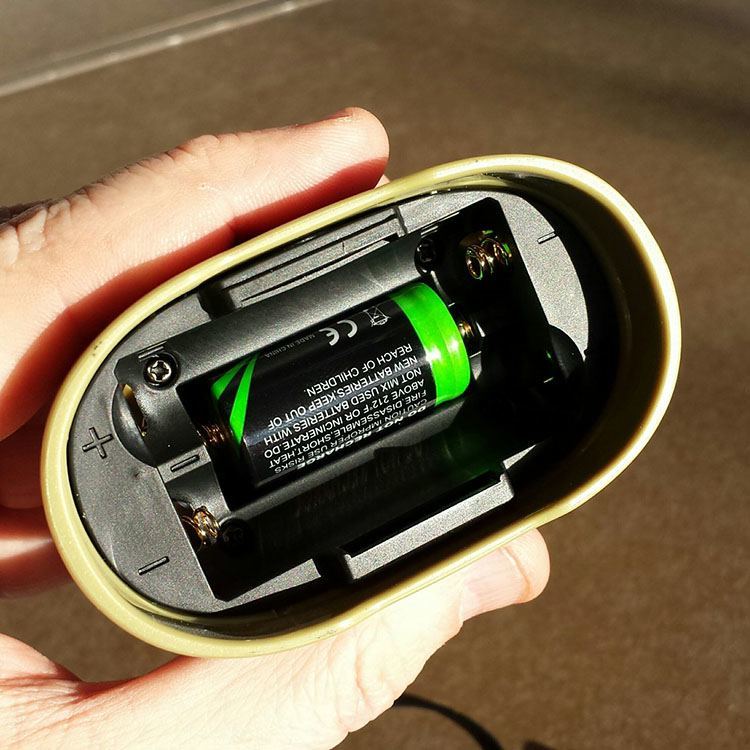 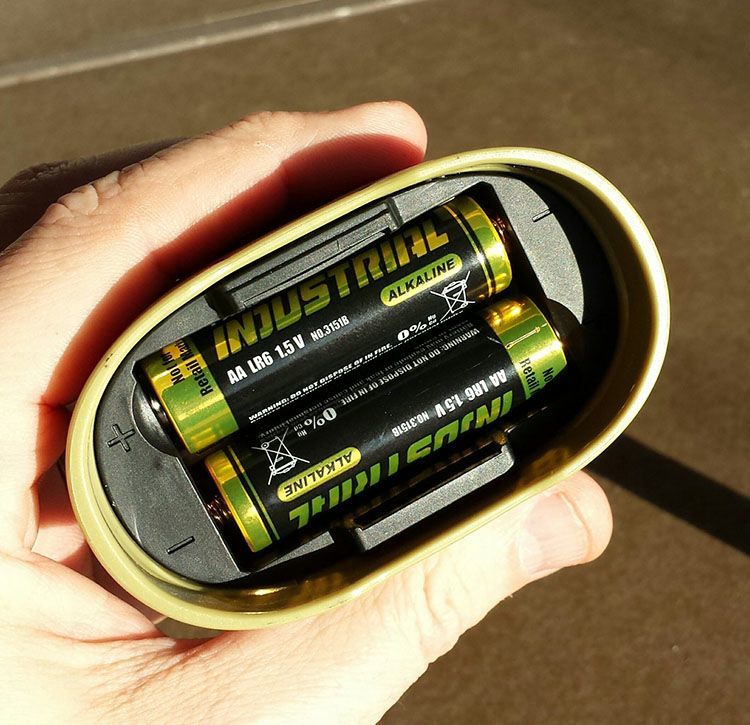 I rarely bring any kind of charging station with me on a camping trip, especially on an ultralight trip which this lantern is made for. So I opt for regular ole’ AA batteries instead of the other two options. The battery life is good and you can find them everywhere.

WHAT ARE OTHER BUYERS SAYING?

We’ve read the online reviews of the Fenix CL20 and here’s what other buyers had to say:

It was a challenge to find any real negative reviews. I only found 2 or 3 and they had little to do with the actual lantern itself and how well it worked. While the weight of the light is heavy, the tiny size more than makes up for it. Frankly I didn’t find it heavy at all. And battery life is always a point of contention with this type of product. Everyone wants longer life at higher power, myself included. The CL20 has average battery life, no better and no worse.

Since the time of this review I have purchased two more Fenix CL20’s for myself, one of which is stuck to my refrigerator in case of power outage (a tip I read in one of the many positive reviews). I have also purchased several more for my friends that have everything – and they love it. 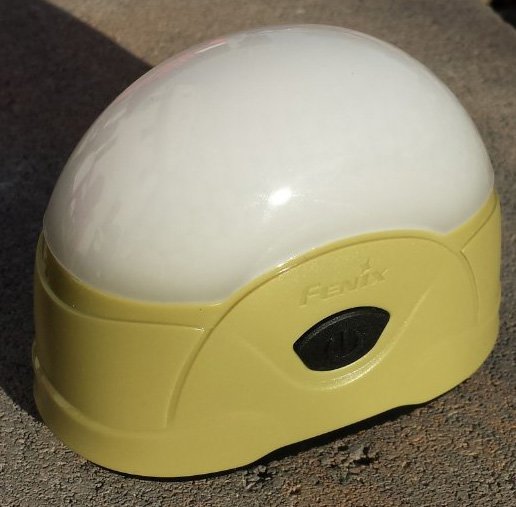 If you need a strong, ultra-compact lantern and value versatility, quality, power and weatherproofness, the Fenix Cl20 should be at the top of your list.

Update: Since I released this article, Fenix Lighting released a new version of the Fenix CL20 – the Fenix CL20R! The Fenix CL20R actually addresses the two biggest complaints about the CL20 – weight and battery life.

It’s brighter, has twice as much battery life, smaller, lighter, and completely rechargeable! It’s twice as bright and runs twice as long – I’m overly impressed. These will definitely be replacing my CL20’s for more efficiency and hopefully no more wasting batteries!

As always, thank you for visiting Gear Cloud. We appreciate your time and hope this article was helpful.