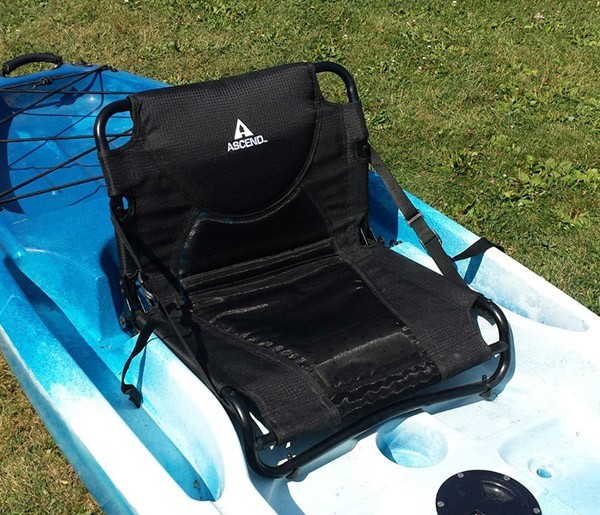 Kayak seats have changed dramatically in the past few years with traditional gel seats and their tethered back supports replaced by raised mesh seats that breathe better, provide better back support, keep your butt drier and resemble a high tech lawn chair.

Unfortunately, these high end seats are rarely found on what I would consider ‘budget conscious’ kayaks. If you plan on spending $500 or less you will likely get a thin gel seat that sits flat on the bottom of the kayak leaving you with a sore back and a numb butt.

Worse yet, if you prefer a sit on top kayak, the gel seat is often placed on or around the scuppers (self-bailing holes) which means a wet back side even on calm waters. No thanks!

My wife and I recently purchased 2 kayaks from Bass Pro. The Ascend D10 ‘sit in’ model for her…

and for me, being a fisherman and wanting a stable platform that I could stand up in, the D10t ‘sit on top’….

This model comes with a pretty good gel seat with decent back support but after only an hour on the water numb butt sets in. It also sits atop two scuppers and once you sit down it’s the lowest point of the kayak. No matter how hard I tried I always ended up wet as all the water makes it’s way there.

My envy over the seat in her kayak finally got the best of me and I hauled both of them out on the lawn on a Saturday afternoon to figure out if, and how, I could make a slight mod to the seat or the hull of my yak to accommodate it.

The upgraded seat, with a bit of pressure, will wedge in between the side storage compartments of the D10t kayak. It’s a tight fit and pushes on the walls slightly which longer term is probably not the best solution, but it works.

The seat will be slightly forward of where your butt would land in the stock seat but the kayak performance is not impacted at all. You will notice in this picture the plugged scupper holes.

This was a quick and easy modification that had to go one step further to make it more stable and permanent. The seat needed to be raised slightly so it would sit further back, and above the side rails.

Upgrade The Seat of Any Kayak

Here are some ideas on how to upgrade and customize the seat in just about any kayak. If you have an uncomfortable gel seat and want to find another solution, take a look at some of these modification ideas and aftermarket seat options.

Take a stroll through the furniture hardware aisle of your local Lowe’s or Home Depot. You will find all kinds of rubber pads, feet, and other pieces you can use to lift, lower and attach just about any seat to any kayak. It just takes some creativity and trial and error.

Another alternative is to use the foam blocks that come with most canoe roof top carrier systems as bases for your seat. They are typically cheap, the average roof top system comes with 4, and costs $20 to $40.

Place the blocks under the rails of the aftermarket seat to gain a little height under your seat which helps in clearing some of the on deck obstructions. They can be moved and adjusted to help you fit almost any kayak. The Malone Canoe and Kayak Carrier Blocks cost less than $40 at Amazon. You can find them at most sporting goods stores as well.

Here are a few good aftermarket kayak seats that, with a little work, can be modified to fit your kayak and make your paddles comfortable and dry. It’s time to ditch the flat gel seat for something better.

The Ascend Deluxe Kayak Seat. This is the standard seat on the Ascend D10 which Bass Pro sells as an aftermarket seat for $89.99  They are extremely popular and usually back-ordered.  You can also find them on Ebay from time to time, but they also sell out very quickly.

Bass Pro also sells the aftermarket Ascend Swivel Seat, for $99.99 which is a great choice for sit on top kayaks with a relatively flat deck, or if you want to customize a slightly lifted platform that lets you spin 360 degrees. You can also mount this seat to the top rails of your kayak, something I will experiment with on our Pescador 10.

Priced at $350 the Harmony Phase 3 Airpro Max is the Cadillac of kayak seats. It’s a little pricey for me but there’s no question it’s comfortable, adjustable and can be customized to fit a sit on top.

The Larry Chair is an economical solution to the kayak seat conundrum. You can pick one up for about $50 on Amazon. it folds up in a compact bag and can be modified to fit all kinds of watercraft from kayaks to paddleboards. It’s the highest of the aftermarket kayak seats and gets you 10 inches off the deck.

The Hobie Mirage Kayak Seat is expensive but it’s super comfortable. If your kayak has the beam and you have the budget this a heck of a seat that will keep you on water all day. You can pick one up for around $500 on Amazon.

Last but not least, the Surf to Summit Drifter Kayak Seat. It looks more like the traditional gel seat but with a few advantages. The raised seat bottom keeps you a little drier and the high, firm back gives you good support. Reasonably priced at around $125 on Amazon.

Ready to upgrade your kayak seat?

If you’re tired of numb butt, wet seat kayaking on your sit on top, it’s time to upgrade. Pick the seat that’s right for you and start modifying using some of these techniques. It will feel like you have a brand new kayak, you’ll be more comfortable and use it more. Without spending a fortune.

Thank you for visiting Gear Cloud. We appreciate your time and your support.