The Grilliput Duo Review – An Ultra Compact Grill. Get Your Food Off The Rocks!

Ultralight hikers and campers who don’t want to cook their food on a rock or stick will appreciate The Grilliput Duo portable camp grill. It packs smaller than any other portable grill we reviewed and is made of high quality stainless steel that can take the heat. As soon as I took the grill out of the package I was impressed with the design. All of the components; legs, grill slats and side tubes fit neatly in the main, one inch by twelve inch tube. Ideal for gear heads like me that love to get lots of gear into small packs. After I had removed all of the pieces and failed at assembling the grill three or four times (did I mention there are no directions?) I was forced to check out youtube for some help. I found this very helpful video from TrailandMountain.com that explained how it goes together. It really isn’t difficult but also not intuitive so some help was welcome. 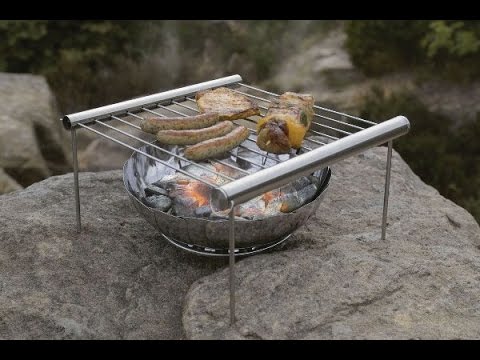 As soon as you pick up The Duo you will know its built solid. It weighs in at just under a pound and a half and is all stainless steel from the tubes to the legs to the grill slats.

Looking at the overall quality, I would ​give it a good, not great. The main construction issue I found was two of the legs did not tighten up as I would have liked and wobbled a bit. It didn’t affect the stability (surprisingly), or anything else but I found it a little annoying. You can see the issue in the image above. The leg simply wouldn’t thread on far enough.

I left The Duo grill outside for over a week through a hard frost, rain and cold weather to see how stainless the stainless steel actually is. I expected to see rust spots but was pleasantly surprised to find none even after several uses.

It also held up over intense heat. Some of the online reviews reported melting and bowing of the grill slats which I didn’t experience at all even over scorching coals. I did struggle to put the grill together the first couple of times as I mentioned and horsed one of the slats which bent it slightly. I chalk that one up to user error but feel the company could definitely help us out with some simple directions.

Cooking with the Grilliput Duo

Sitting only 6 inches high, the grill will cook food fast if you have good heat under it. The best results I’ve gotten are dropping the grill on a bed of coals after my fire has burned down and I’ve spread them out. The heat is consistent and cooks well. It can be a challenge placing and leveling such a small grill over a large fire. You can easily make a smaller fire with small sticks and small logs that fit under the grill after you’ve leveled it or just bring a small bag of charcoal and put them in your dollar store steamer.

I have never lost a rolling hot dog on this grill. The large side tubes keep food from rolling off which is a nice added feature especially if you have trouble finding a truly flat spot to cook on.

The grill slats are great for normal grilling (meat, vegetables) but not heavy enough to support larger pots and pans. I read a number of reviews from people who tried that and were disappointed. In my opinion The Grilliput Duo is just not made for that.

We’ve read 379 online reviews of The Grilliput Duo so you don’t have to. Here’s what they had to say…

​A unique design and compact storage sets The Grilliput Duo portable camp grill apart from other portable camp grills. You simply wont find one that packs smaller. Cooking is a snap as it’s stable (even with wobbly legs) and low enough to cook thoroughly and quickly. The stainless steel is very high quality and will stand up to not only heat but the elements in general.

The minor flaws (difficult assembly, construction issues) would not hold us back from recommending the Duo grill. If the grill is used for it’s intended purpose it works great and adds to a great camping experience – which is the entire point anyway.​

Hutch is the founder of Hiking.Earth. He comes from an outdoors and environmental background and helps people love and enjoy the outdoors and protect the planet.

We research, test, & and review the best products. As an Amazon Associate, we earn from qualifying purchases.

We’re committed to helping our readers have the best experiences outdoors by providing up-to-date and information-rich content.